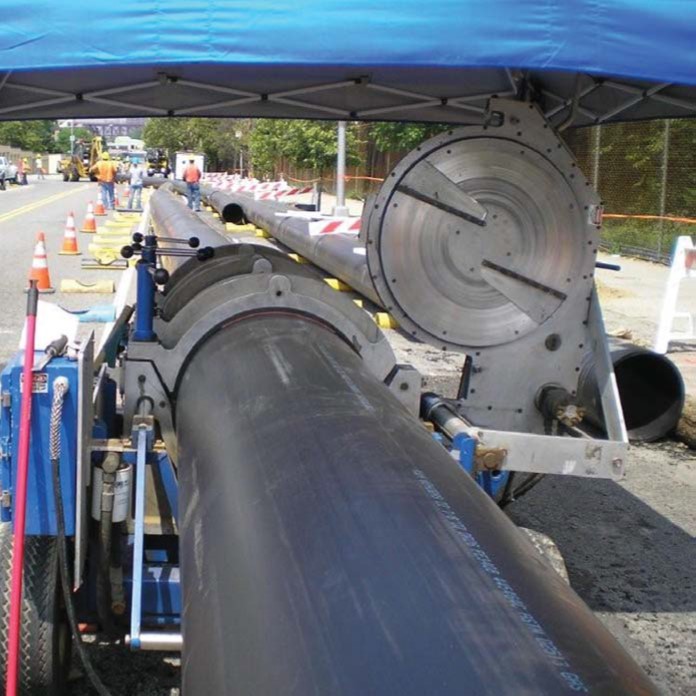 A city that never sleeps rarely comes to a standstill for anything, and refitting the gas pipeline servicing a major urban enclave is no exception. So, when Con Edison, the company that owns and  manages the gas pipeline system for the city of New York, determined that the aging steel system in the congested, high traffic area of Queens needed upgrading, they sought a solution that   provided minimal disruption, maximum efficiency and long-term reliability.

“Closing a road, blocking a driveway or even interrupting the traffi c fl ow temporarily was not an option,” said John   Torielli of PIM Corporation, the trenchless technology firm selected by Con Edison. In addition, the safety issues involved when dealing with a natural gas distribution pipeline serving a heavily congested area meant every aspect of the job – and pipe fusion in particular– was crucial.

Embracing the challenge, PIM, of Piscataway, NJ, undertook the arduous task of rehabilitating the 1,900  feet of pipeline in this job utilizing a Subline method of pipe renewal, a specialized technique for which PIM is a licensee in the northeastern United States. Subline is a “close fit” polyethylene lining technique developed by UK-based Subterra Ltd., which feeds pre-fused standard polyethylene pipe through a special former mechanism at ambient temperatures on the job site to fold it  into a “heart” or “c-shape” to reduce its size temporarily during installation. Plastic straps are installed to hold the pipe in its deformed shape, allowing it to be easily winched into the host pipeline  in need of rehabilitation.

Following insertion, the new polyethylene liner is pressurized with water and the internal pressure breaks the straps and allows the new liner pipe to return to its original shape, forming a “tight fit” inside the old pipeline. Using this method would allow PIM to pre-fuse lengths of up to 200 feet, providing clearance over driveways and roadways, eliminating traffic  disruption. As the pipe was being installed, these pre-fused 200 foot lengths of HDPE liner pipe were subsequently fused together to form lengths of 900 to 1,000 feet.

Needless to say, high on the critical list was the strength and integrity of these joint fusions explained Jan Nyquist, of Pipefusion Services Inc, a specialized fusion company selected to perform the fusions on this demanding project.

“This was not a job for amateurs,” said Nyquist, adding, “The potential consequences resulting from a leak in this large, high pressure, 24-inch, natural gas distribution pipeline serving a heavily congested borough of New York City requires no further comment.”

Pipefusion, which is based in Huntsville, Ontario, Canada, has an extensive background  in fusion principles and trenchless technology involving polyethylene pipe. In this case it was KWH Pipe, a well-known pipe manufacturer with a background in extrusion technology dating back  to the 1950’s, that produced the 22-inch PE 100 polyethylene pipe for two critical areas where the existing 24-inch steel gas pipe was to be upgraded with the Subline process. To fuse the 22-inch  SDR 26 pipe, Pipefusion selected the Connectra 824, a machine manufactured by Connectra Fusion of Gainesville, TX. With the capability to fuse pipe sizes from 8-inch IPS to 24-inch IPS, it has a total effective cylinder area of 6.283 inches and more than enough carriage speed and hydraulic power to fuse the 22-inch SDR 26 pipe to the strict fusion parameters which had to be identified, approved and recorded for each fusion.

“Connectra Fusion is known for its simple, cost effective approach to equipment design and innovative solutions to fusion challenges,” said Nyquist.  Connectra’s equipment is built to last, and the light weight and easy handling of the Connectra 824 meant that it could withstand the daily set-up and removal from the job site as required by the project parameters, he explained. “In fact, it was done quickly and with a minimal amount of effort.”

Pipefusion applied its best practice principals to ready a 24-inch fusion machine by checking nd even double-checking the machine’s settings prior to starting the project, explained Nyquist. Among other things, the company re-calibrated the hydraulic gauge which measures fusion force in the cylinders, addressed in detail the fusion interfacial requirement and calculated gauge pressure to be used for the pipe size and SDR, and replaced every hydraulic seal on the 24-inch machine as a precautionary measure to eliminate any possibility of leaks. “A job of this size and the difficulty involved left no room for error, and it went exactly as planned,” said Nyquist.

The second of two such large-scale installations performed by PIM Corporation using Pipefusion Services and the Connectra Fusion equipment, the Queens gas line rehabilitation project was successfully  completed in July of 2007. Both this installation and its predecessor were completed within budget and took between fi ve and seven days, including time and costs associated with cleaning, closed circuit television inspection, fusion, lining, testing and the installation of mechanical end fi ttings. No major difficulties were encountered on either project once installation commenced with the  exception of rain, sleet and snow on the fi rst project which was installed in December of 2005. This experience, however, proved that the system can also be successfully applied in winter  conditions.

NyPipe offers quality products, competitive pricing and reliable service. There is no request too small or job too complex. Contact us today for a free quote.