Public art, and art in general, are often subject to critical inspection which sometimes tips in its favour and sometimes not. Huntsville’s latest public art installation, Pipe Man, an 18-foot tall monument to Tom Thomson which floats in the Muskoka River adjacent to the Town Docks, is no different. Since it was installed on November 3, reaction has been swift with some loving it, some hating it, and some wondering what the heck it is.

Today (November 9), an official ceremony to recognize Pipe Man, and the generosity of local businessman Jan Nyquist for donating it, acknowledged the debate it has engendered.

“I know (art) is important for our souls and it’s important for our discourse,” said Mayor Scott Aitchison. “And if Facebook is any indication, this latest installation has provided lots of opportunity for discourse… people are talking about it and I think that’s fantastic. That’s exactly what should happen.”

Aitchison noted that Pipe Man’s subject, along with the Group of Seven painters, endured heavy criticism for their art. “They thought it was ugly. I’m told that some conservative critics thought that the paintings looked like the contents of a drunkard’s stomach. And when the National Gallery of Canada bought Arthur Lismer’s September Gale in 1926 (with public funds), there were protests and it was referred to as ‘the greatest abortion of a work of art ever seen in our fair city’. There were protests against the use of public funds to acquire such ‘hideous, freakish and unnatural paintings by artistic perverts’. I guess everything finds its time.”

I hope this piece of art reminds people that that’s what it’s about: having us have a conversation with each other, and to remind each other that we’re all part of this community and that the more we talk to each other the better off we are.
MAYOR SCOTT AITCHISON

Nyquist, owner of Pipefusion and NyDock, donated Pipe Man in honour of his company’s 35th anniversary. He thanked the mayor, councillors, and Town staff, in particular Teri Souter, for their support of the project, along with artist Beverley Hawksley for her artistic vision and Pipefusion and NyDock staff “all of whom played a role in one way or another, conceiving, designing, creating, building, fine-tuning, and implementing this unique monument. I sincerely hope that Pipe Man instills creative conversation and interest for Huntsville residents and visitors for the benefit of our community.”

Pipe Man depicts a stylized image of Tom Thomson smoking a pipe. Beverley Hawksley, after consultation with the company’s staff on the theme for the piece, approached the National Archives of Canada for permission to use the likeness of Thomson from a 1914 photo as inspiration. The other side of the piece has 35 ripples representing Pipefusion’s years of business in Huntsville. 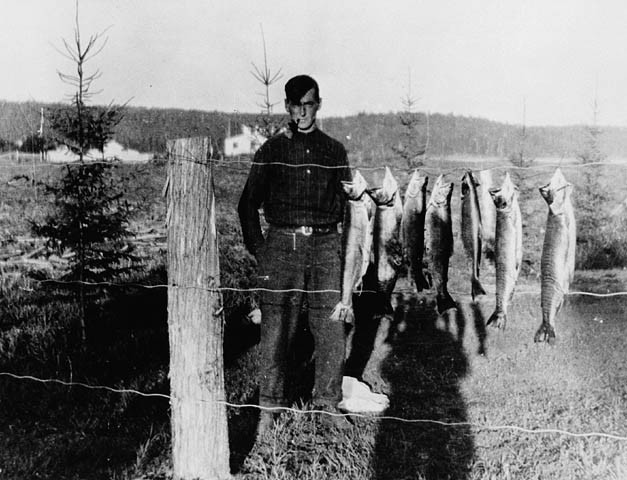 “We sat around a table and everyone had ideas to honour the length of time Pipefusion has been here as well as our own historical significance,” said Hawksley. “It just seemed that he, being so well known here and his story being part of Huntsville’s history, it just seemed to match.”

I think it looks great. I think public art can be challenging because it’s not in a gallery and people aren’t making a choice to walk in to see an exhibit. All sorts of points of view come to the forefront and that’s the great thing about public art – whether people like it or don’t like it I think that it’s exciting to talk about it. It was exciting and challenging and I am extremely pleased.
ARTIST BEVERLEY HAWKSLEY

The 100th anniversary of Tom Thomson’s death in 2017 was also part of the impetus for the design. “It is still an enduring Canadian mystery and it’s of interest to people from all over the world,” said Teri Souter, the Town’s Manager of Arts, Culture and Heritage. “The material that it’s made out of is a newer, modern material but that’s something Tom did with his work – really be avant-garde and push the envelope.” 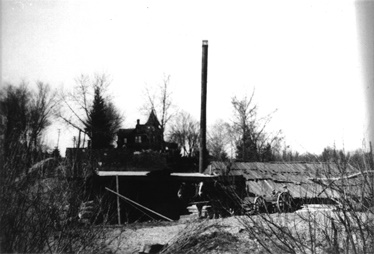 Huntsville Planing Mills was a successful business for decades on the shores of the Muskoka River, where River Mill Park is now (Photo: Muskoka Heritage Place)

Souter also drew a connection between Pipefusion’s manufacturing success with Huntsville’s industrial and manufacturing history. “Having it be gifted to us by Pipefusion, which is a manufacturing company that is successful in our community when there’s not a lot of manufacturing left in Ontario, is something to also be celebrated.”

She said she’s not surprised by the discussion about the piece’s value or validity, but respects people’s reactions to it. “The biggest and most iconic (of public art installations) is the Eiffel Tower which was panned by the critics of the time. Now, Tom is not ever going to be the Eiffel Tower but he may add something to our downtown core on this waterway that was historically where industry grew. My hope is that people will see Pipe Man and find out more of the story and say, ‘wow, I didn’t know that’.”

Pipefusion offers quality products, competitive pricing and reliable service. There is no request too small or job too complex. Contact us today for a free quote.

Muskoka ON: The Story of a Little Floating Tent
Once upon a time, we had a client…
Read More